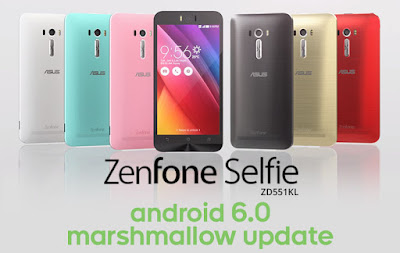 Marshmallow update for ASUS ZenFone Selfie - ASUS is working hard to meet its self-imposed deadline of upgrading several ZenFone devices to Marshmallow before the end of Q2 2016. We're technically in July and Q3 already, but we'll give the company a little leeway for almost-making it on time with these two new OTAs.

Some apps that will no longer be preloaded once ZenFone Selfie ZD551KL device have been upgraded to Android 6.0 Marshmallow are Asus Backup, Google Play Books, Google Play Games, Google Play Newsstand, Google+, Mirror, Remote Link, PC Link, Photo Frame, What's Next, and Snap View, and ZenFlash (which can be downloaded from Google Play)

The whole firmware update files weighs 1.63 GB, so make sure to download it over Wi-Fi and to update ASUS ZenFone Selfie to Marshmallow manually, first download the OTA file for Zenfone Selfie from Source link below.