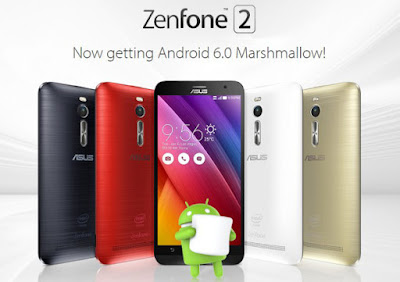 Marshmallow Update for ASUS ZenFone 2 - Some time ago Asus Zenfone 2 Laser ZE500KL and Zenfone Max ZC550KL already getting an update to Android 6.0 Marshmallow. And now, turn Zenfone 2 ZE551ML and ZE550ML could taste the sweetness of the marshmallow. The Android Marshmallow software update for the ZenFone 2 is an over-the-air one and was pushed out by ASUS on June 13.

Not only does the software update bring the Asus smartphone from Lollipop to Marshmallow, but the ZenFone 2 with model number ZE550ML and ZE551ML also benefits from the fact that the bloatware on the smartphone gets removed. Basically, over a Dozen apps will not be pre-loaded on the ZenFone 2 once users have updated their handset to the Android 6.0 Marshmallow OS.

The Android 6.0 Marshmallow update is rolling out over-the-air. It removes a good deal of bloatware, bugs too, and brings various other improvements. The whole update weighs 1.1GB, so make sure to download it over Wi-Fi.

If the OTA update hasn't reached you yet and you really can't wait, you can follow the Source link for download links and instructions for a manual update. Still, I'd recommend waiting - you waited this long, what's a few days more?